Our Five Loaves of Barley Bread

At the time of Jesus, barley bread, unlike wheat bread, was the bread of people who were poor [1].  And there were only 5 loaves for a crowd of 5 thousand people.

What matter is the attitude – the attitude of Jesus.  Jesus noticed the hunger of the people.  Nobody asked or suggested that he gave the crowd food.   It was Jesus who took the initiative to feed them.

“Then Jesus took the loaves, gave thanks, and distributed them” to the people.  These three actions are the very actions Jesus would do when he gives us the Eucharist, the gift of himself – the gift of God’s life and love.

The number of people and their needs are so great.  We might not have much.  Five barley loaves might be all we have.  With Jesus’ attitude and united with him in his gift of his Eucharist, our five barley loaves can satisfy the hungers of people.

Jesus’ Heart Was Moved with Pity

When Jesus “saw the vast crowd, [who] were like sheep without a shepherd,” “his heart was moved with pity for them.”

Mark’s description of Jesus’ response conveys the sense that it was heartbreaking or gut-wrenching [1] for Jesus seeing the people and their situation.

So is Jesus when each of us and any one of God’s children suffer in anyway.

And may we imitate Jesus’ compassionate heart when our brothers and sisters suffer.

Jesus’ Mission, with His Authority

Jesus “gives [the Twelve] authority” and sends them out.

As they go, they “preach repentance,” “drive out many demons,” and “cure the sick.”

These are the same ministries that Jesus has been doing with the Twelve accompanying him.

Now, Jesus sends them to continue his mission.

So it is with us.  He sends us out today to continue his mission, with his authority. 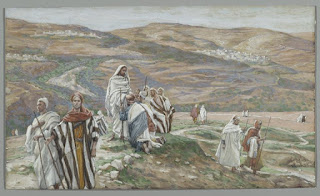 Image source:  James Tissot, He Sent Them Out Two by Two, wikimedia.org

In this passage, the reaction of Jesus’ neighbor is strange, to say the least.

They have heard of Jesus’ power in his healing and preaching.  Why are they not proud that one of their own is doing such amazing things?

Or is it because they cannot see the hand of God in a carpenter?  The Gospel reports that “they were scandalized by him” or that “he was a stumbling block for them.”  (The English text used for our reading translates, “They took offense at him”).

Does my way of seeing or treating some people prevent me from seeing God’s presence in them, and respecting them as children of God?

Jesus Is “The Face of God’s Mercy”

Three of the people in this Gospel passage did what they were not supposed to do.

The woman who suffered from hemorrhages also broke the law and caused Jesus to also break the law.  By the standards of the time, her illness had rendered her unclean.  Yet, she made her way through a crowd to touch Jesus, again, a man unrelated to her, and a rabbi.

She did that because “she had heard about Jesus.”  So must have Jairus.

Jairus and the woman did what they did because they knew that Jesus would be willing to break the law to help them.  And that he did.

Thus, in the words of Pope Francis, Jesus is “the face of God’s mercy.”

Like Jairus and the woman, may we trust in God’s mercy, incarnate for us in Jesus Christ.

The disciples ask the wrong question, "Do you not care that we are perishing?"

Of course Jesus cares.  Not only does he care for their physical well being, he cares for their salvation also.

And not only for his followers.

The Gospel passage begins with Jesus telling the disciples to "cross to the other side" of the lake, the side inhabited more by gentiles than the children of Israel.  Then, following this passage, Mark would recount Jesus healing people who are gentiles.

For Jesus, these people are all God's children.

And Jesus cares for them all.

Jesus cares for us all.

Jesus speaks of the small things that matter.

All of us probably have experienced how a word, a gesture, a moment of carelessness or thoughtlessness could ruin a relationship or a project that we had taken months or even years to cultivate or develop.

We also know that we can touch people's heart with a genuine word of support, a kind gesture, or a thoughtful action.

Last week, we celebrated the Solemnity of Corpus Christi...  A small piece of bread, a sip of wine are now the Body and Blood of the Savior.

Small Things that bring us God's love and salvation.