What father would respond like that to the kind of behavior of those two sons described in the parable? To the kid who insolently says, "I will not" to his father's command (v. 29), he just walks away and turns to the other son. And to the son who fails to keep his word, the father does not appear to do anything to punish him either.

Only our Heavenly Father has that kind of loving patience to us, his disobedient, insolent, and unfaithful children. In fact, He has more than enough patience to wait for us to turn back to Him and do the right thing.[1] He does not even force on us what is good for us.

We often find ourselves behaving as one, or both, of the sons. We all have said no to God at one time or another in our lives. Or we say yes, and then fail to do what we have promised. We can be both tax collectors and prostitutes, and chief priests and elders of this parable. The ideal is to both say yes and willingly do what God asks of us.[2]

We know the ideal that we are supposed to live by. Yet, we find ourselves living nowhere near that ideal. That is where God's mercy and love enters. God is always there, waiting for us to freely come to Him and enjoy the happiness that He alone can give us.

[1] This reflection is from Kyle Zinno, a Salesian seminarian currently living in Orange, NJ.

Do I haggle with God?

Fr. Francis Moloney, SDB., describes the scene at the end of the day as he expands on the parable of Jesus. “One must imagine the queue, with the newly-arrived workers at the beginning, and those employed earlier, tired after a full day in the vineyard, watching them as they go off with their denarius. If we put ourselves in the place of those who are at the end of the queue, we can understand how they rightly expect to receive more than the agreed denarius. We can also share their disappointment and indignation when they do not (vs. 11-12).[1]

Let’s go back to the beginning of the parable. We find the landowner hiring the first group of laborers “after agreeing with them for the usual daily wage” (v.2), which is one denarius. There is apparently some negotiation going on here. These laborers make and agree on a deal with the owner.

There would be no such negotiation or agreement with the other groups of workers. Or at least, there is no mention of any demands on the part of the hired hands. To the second group, the owner tells them “I will give you what is just” (v. 4). And he does “likewise” (v.5) to the group he hires at noon and at three o’clock. Most interestingly, to the last group hired at five o’clock, all he says is “You too go into my vineyard” (v.7). There appear to be no negotiation whatsoever with these groups.

Then only two groups of laborers are mentioned in details at the time of payment. The group that began last comes, and we are simply told, “each [receives] the usual daily wage” (v. 9). Obviously, they should appreciate that generous pay. So, they take it and go.

The attention is now focused on the first group of laborers. They receive the pay they have agreed with the owner, yet they complained. They have expected to “receive more” (v. 10), and they are now disappointed.

The laborers attitude would be understandable if the parable were about regular business dealing, even though the landowner is in the right. However, this is not about a business agreement, but as Jesus introduces the parable, it is about the kingdom of heaven (v. 1). And membership of the kingdom is God’s gratuitous grace. It is a totally free gift.

On the contrary, when one fails to acknowledge the kingdom as God’s gift, one can take it for granted, or worse, presumes that one is entitled to it. Nobody can negotiate with God here. If one haggles with God, one already has the wrong presumption. And that will lead to the disappointment, a disappointment at God’s boundless generosity (v. 15).

The Cross of Jesus - Revelation and Instrument of God's love

Reading a preface or introduction of a book often gives the reader the summary of the topic and major themes of the book. Similarly, the prologue of John’s gospel (1: 1 – 18) provides the major themes of the rest of the gospel. One of those themes, indeed, one of the major one, is found in 1:12, “to those who did accept him (here, referring to “the Word”) he gave power to become children of God.” In the fullness of time, the Word of God came to live among us so that we can become one with God.

Now, in chapter 3, we find Jesus discussing this theme of salvation with Nicodemus. Moreover, here we learn of two aspects of this theme. First, the Son was sent to save the world by the Father. And it was out of love that the Father sent the Son. “God so loved the world that he gave his only Son, so that everyone who believes in him might not perish but might have eternal life.” In other words, the Father and the Son are united in this act of love.

This act of love reaches its climax on the cross. Here is the second aspect of the theme of salvation. The cross is both the moment of God fulfilling his plan of love and the revelation of God’s love. By the Son’s cross, we learn and receive the love of God, the love that saves us, and gives us the eternal life of God’s children. For the people who once wandered in the desert of sins and death, the cross gives them salvation and God’s love. Just as Moses lifted up the serpent in the desert, so must the Son of Man be lifted up, so that everyone who believes in him may have eternal life.” The cross, then, is both the revelation and the instrument of God’s saving love. By his cross, not only did Christ save us, but he made us children of God.
Posted by Fr. Dominic Danh Tran, SDB at 8:58 PM No comments:

Feast of the Exaltation of the Holy Cross 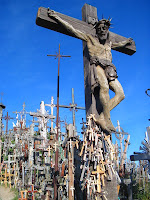