4th Sunday of Easter - B

These four virtues/qualities are all present in this passage as the Good Shepherd reveals his very self to his friends.

And there must be all four in any authentic relationship.

All four qualities exists in the way the Good Shepherd relates to his flock.


He knows them. Moreover, he knows them as intimately as the knowledge between him and the Father. He loves them, even to the point of freely laying down his life for them.

3rd Sunday of Easter - B

“In the Breaking of Bread”

Jesus makes himself known to the two disciples on the way to Emmaus in the breaking of bread.  Luke writes, “It happened that, while he was with them at table, he took bread, said the blessing, broke it, and gave it to them.  With that their eyes were opened and they recognized him.”  (24: 31-32).

In today’s Gospel passage, which follows the Emmaus event, the two recount that experience to the other disciples.

Once the two have recognized the Risen Christ in the breaking of the break, they also recall how their hearts were “burning within [them] when he spoke to [them] on the way and opened the scriptures to [them].”

Then, the Risen Christ appears to the whole group.  He now speaks, and again, shares a meal with them.

It is still our privilege today to have the Risen Christ in our midst.  In the celebration of the Mass, he continues to stir up our hearts with his words and opens our eyes with his broken bread.

At the end of this Gospel passage, Christ asks us to be witnesses of Him who suffered and rose.

Once our hearts have been stirred with His words and our eyes have been opened with His Breaking of the Bread, we are sent to witness to Risen Christ in the broken members of his Body.  This is the same Christ, yet in a different way of being the Broken Bread.

Let’s pray for the grace to recognize the Risen Christ in those who are His broken body.

2nd Sunday of Easter - B

"Peace Be With You"

“He Has Been Raised”

Mark draws our attention to the two sentences with the verbs in the passive voice.  First, “the stone had been rolled back.”  Second, the words of the young man in white robe, “He has been raised.”

The women know about the stone that covers the entrance to the tomb.  Yet, they go there without any plan of what to do with the stone, which is “very large.”

Without mentioning the actor, Mark uses the technique known as “divine passive” in Scripture writing.  It implies the action of God.

God acts when we, humans, are not qualified, prepared, or up to the task.  God’s action is always beyond our understanding.

And that the stone has been rolled back prepares the readers, and even calls us to a greater act of God – raising Jesus from the dead.

It is God, who our of mercy and love for us, raises us to new life and the raising of Christ from the dead.

Posted by Fr. Dominic Danh Tran, SDB at 8:58 AM No comments: 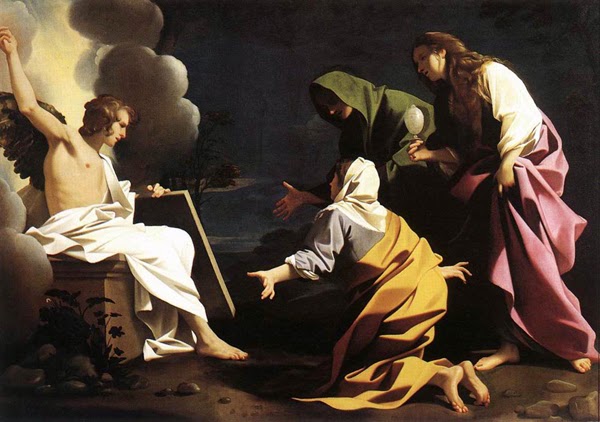 When the sabbath was over, Mary Magdalene, Mary, the mother of James, and Salome bought spices so that they might go and anoint him.Very early when the sun had risen,on the first day of the week, they came to the tomb.They were saying to one another, “Who will roll back the stone for usfrom the entrance to the tomb?”When they looked up,they saw that the stone had been rolled back;it was very large.On entering the tomb they saw a young mansitting on the right side, clothed in a white robe,and they were utterly amazed.He said to them, “Do not be amazed!You seek Jesus of Nazareth, the crucified.He has been raised; he is not here.Behold the place where they laid him.But go and tell his disciples and Peter, ‘He is going before you to Galilee; there you will see him, as he told you.’”

Posted by Fr. Dominic Danh Tran, SDB at 8:47 AM No comments: