The King of Truth

Jesus’ kingship is different than the kingship expected by the Jewish leaders or familiar to Pilate.

Jesus’ “own nation and the chief priests handed [Jesus] over to [Pilate]” because he did not meet their expectations.  Earlier in the Gospel of John, they had wanted to make him king after he multiplied the five loaves and two fish and fed them (Chapter 6).

And once they have turned against him, he became a “criminal.”  When Pilate asked them of what they accused him of, without specifying the crime, they replied, “If he were not a criminal, we would not have handed him over to you.” (John 18: 29-30)

Pilate, a Roman, expected a different kind of a king, probably the type of oppressive Roman rulers that he is familiar with. In addition, the fact that the rulers handed Jesus over seems to suggest to Pilate that Jesus must have done something to cause his falling out of favor with his “own nation.” That is why he asked Jesus, “What have you done.”

Jesus does not meet their worldly expectations.

On the contrary, Jesus’ kingship and kingdom, though in the world, are not of the world.

Are we willing to listen to the King who has come to testify to the truth, God’s truth? 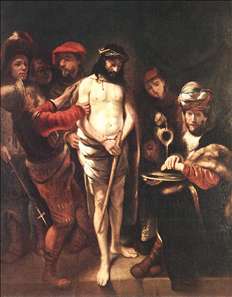 Image source:  Christ Before Pilate by Nicolaes Maes
http://atonementparish.blogspot.com/2010_04_01_archive.html
Posted by Fr. Dominic Danh Tran, SDB at 10:55 AM No comments:

We know that it will happen.  But nobody knows when and how.

Jesus used images that were familiar to his listeners from both the prophets [1] and their life experiences of nature to remind them that the world as they know it will end.

Then Jesus taught them the attitude they must have: to trust.

The location of the passage in the Gospel of Mark and in the cycle of the Sunday readings can shed some light on its meaning.  Last Sunday, Jesus gave us the example of the poor widow’s total trust in God.  Then, after this Chapter 13, the events related to Jesus’ passion and death begin.  In Jesus, we have the supreme model of trust in God’s plan of love.

With that attitude, the disciples need not to worry about when and how the world will end.

Instead, they can focus their lives on Jesus’ words, which alone “will not pass away.”  Moreover, their lives, words, and actions can witness and preach that words of Jesus to others. 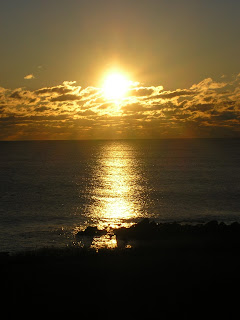 The Extent of One’s Trust in God

In terms of monetary value, the widow gives very little. She puts in two lepta, which “were worth one-sixty-fourth of a day’s salary.” [1]  That is the payment for seven and a half minutes of work by a laborer who works eight hours a day.

But as Jesus points out, she has given more than anybody else.  The seven and a half minutes work worth of salary is “all she has, her whole livelihood.”

Is Jesus here encouraging his disciples, who have left all to follow him?  When they were called, some left their “nets, boats, hired hands, and father,” another left his tax collecting table to follow Jesus. [2]

Then, we have the example of Jesus himself, who by now, in the Gospel of Mark, is already in Jerusalem   In just three chapters (chapter 15), will give his very life out of obedience to the Father for the salvation of all of humanity.  [3]

That is the attitude of trust in God when giving that we, the disciples of Jesus, are called to follow. 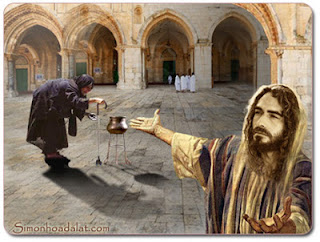 Just One, and Enough

When the scribe asks Jesus the question, "Which is the first of all the commandments?", he seems to be an honest seeker. He is not out to trap Jesus like some other scribes and the religious leaders, who by this time in Mark's Gospel have been in all kinds of conflicts with Jesus.

This scribe is honestly seeking for some priority of the "365 prohibitions and 248 positive commands" in Jewish Law and practices. [1]

Jesus gives the answer citing the two laws that are already in Jewish teaching and practice, as found in the Law that God gave to Moses. However, Jesus now makes them one law, the law of love.
Without love, all the regulations and practices become obligations.

Without love, there is no meaning in relationship, whether with God or with fellow men and women.

Without love, there is no meaning in worship or act of charity.

With love, everything has meaning.

Moreover, for those who accept God's Kingdom, their love becomes the presence and expression of God's love.

God is love, as Jesus teaches and lives.  Therefore, where there is love, there is God.

One Law is enough.  And Jesus lives it!