Commentary
Luke 2: 16-21
Three Responses
(This reflection is mostly based on the writing of Fr. Francis Moloney, SDB, the [*] indicates Fr. Moloney's words) [1]
In this Gospel passage, St. Luke offers three different responses from the people to the events of the birth of Christ.
The first response is that of "all who heard it" from the shepherds. They were simply "amazed." "However, there is no indication that their 'hearing' leads to faith. Not do they make any attempt to 'see' the newly born child. All they do is wonder." [*]
The second response is that of the shepherds. In response to the message from the angel (verses 9 & 10), they "went in haste" to look for the child. And once they have witnessed it, they glorified and praised God. They also "made known the message that had been told them about the child."
However, "they are never heard of again." There is no indication that they were among Jesus' audiences when he later preached and ministered. [*] And no shepherd is recounted among those standing by the cross of Jesus or in the Upper Room after the Crucifixion.
Then, there is the third response, the response from Mary. She will be "present during the life and death of Jesus, and who is still present in the life of the Church." She is able to do that because she "kept all these things, reflecting on them in her heart."[*]
--------------------
[1] Francis J. Moloney, S.D.B., The Gospel of the Lord: Reflections of the Gospel Readings - Year A. Homebush, Australia: St. Paul Publications, 1992; p. 78-79.
Posted by Fr. Dominic Danh Tran, SDB at 12:01 PM No comments: 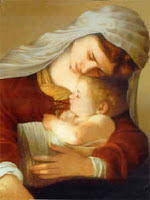 Image from http://www.crossroadsinitiative.com/library_article/844/Mary__Mother_of_God_.html
Posted by Fr. Dominic Danh Tran, SDB at 11:59 AM No comments:

Christmas - Mass During the Night

Commentary
Luke 2: 1-14
God Is Here!
Except for Mark, each of the other three Gospel writers has a unique way of teaching the core revealed belief of Christianity of a God who comes to live among us. (Mark begins his Gospel with John the Baptist's preaching and Jesus' public ministry)
In the words of the angel of the Lord to Joseph, Matthew, deeply rooted in Jewish tradition, provided the name "Emmanuel" and its meaning "God is with us" (Matthew 1:23). In Jesus, God fulfills the promise given through the words of Isaiah to a people under attack by foreign invaders (Isaiah 7:14).
John wrote, "The Word became flesh and made his dwelling among us." The expression "making his dwelling" can be literally translated "pitching is tent." The experience of having God who dwells in a tent among God's chosen people also recalls Jewish history of the days in the desert. There, God lived with the people. [1] Now, the Son, who is God, comes to live among us.
Luke identified the time and place of Jesus' birth. It was in Bethlehem of Judea, during the reign of Caesar Augustus, with Quirinius governor of Syria when Mary "gave birth to her firstborn son."
Indeed, our God has chosen to come and live among us. God is with us in our human conditions, with our concrete circumstances. In Jesus Christ, God is here with us.
---------------------
[1] New American Bible, Revised Edition,
http://usccb.org/bible/scripture.cfm?bk=John&ch=1&v=51001001
Posted by Fr. Dominic Danh Tran, SDB at 10:10 AM No comments:

Christmas - Mass During the Night 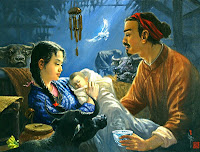 The event of the Annunciation can sometimes appear simple, even mundane. A private event happened to a simple young woman, in an insignificant town of a territory occupied by foreign forces. There were no red carpets, drum rolls or floats.

It is important that believers recognize how incredible God's way is. It is beyond human imagination and standards that God favors and chooses one of God's lowly servants. In fact, that is a part of God's mysterious design.

And often times, the focus is on how a simple woman of faith, out of obedience to God's will, changed the course of human history.

All of that is true.

Yet, we should not allow the apparent simplicity of the event of the Annunciation lead us to think that God ever takes things lightly.

"Nothing will be impossible for God" means God can do anything in whatever way. Yet, this almighty God actually has a plan for the salvation of the human race. In fact, it is was long plan in the making.

Just the references to Jacob and David, two of Jesus' ancestors can give us a hint of how far back God's plan goes. David, whose throne will be given to Jesus, was the king of Israel about 1,000 years before the time of the Annunciation. The dates and the person of the patriarch Jacob were harder to pinpoint. Nevertheless, the Jewish people became aware of their identity of God's chosen people as the house of Jacob went back hundreds of years before David.

So, just on the human level, it was thousands of years of preparation for this moment of fulfillment in God's plan for our salvation. And again, this is the God for whom nothing is impossible.

God does not take our salvation lightly.

How should I take my salvation?

Commentary
John 1: 6-8, 19-28
Who Am I? Who Am I Not?
John the Baptist is clearly identified here, "He was not the light, but came to testify to the light."
More importantly, he was "sent from God."
John himself knew who he was, and what his mission was. He was a messenger from God, sent "to testify."
His life, his words, and his action were evidently marked by his identity. As a result, his life, his words and his action served to fulfill that identity and his mission.
How about me? Do I believe that I am from God with a mission? Are my life, words and actions truthful to that identity? Do my life, words and actions serve that God-given mission?
Posted by Fr. Dominic Danh Tran, SDB at 5:24 PM No comments:

Preaching of John the Baptist by Adam_Elsheimer
https://picasaweb.google.com/lh/photo/sQCorNO9asSekBURIQbnLg
Posted by Fr. Dominic Danh Tran, SDB at 5:12 PM No comments:

Commentary
Mark 1: 2-8
Our Task: Preparing the Way for the King
It's probably helpful to link this Sunday's Gospel with the Gospel we listened to a week ago from Mark 13: 33-37. There, "the Lord of the house" so trusts us that when "he leaves home, [he] places his servants in charge, each with his own work."
Today, in the words of John the Baptist quoting the prophet, God Himself speaks to us. [1] And God invites us to prepare the way for the Kingdom established by the Messiah in the power of the Holy Spirit. There is the work for Christ's followers, who have been baptized, not with water, but with the Holy Spirit.
Isaiah the Prophet spoke to the people of Israel who were then in exile that their nation will one day be the place where God's glory shines forth (Isaiah 40: 1-5). [2] That was the message for a people with no hope.