Trying to Understand and Carry Out God’s Plan

One way of reflecting on this Gospel passage from Luke is to focus on the interactions between Joseph, Mary, and Jesus.  As we do this, ask if you find the similar experiences in your own family.

-          The parents were religious observant Jews.  They made the pilgrimage to Jerusalem every year.  They made sure their son is raised in the religious tradition of the people, according to God’s covenant with their ancestors

-          When they discovered that their twelve-year-old son is not where they thought he would and should be, they go looking for him.

Were they arguing as they tried to figure out what happened? Did they feel guilty?

-          Should Jesus’ answer “Did you not know that I must be in my Father’s house?” be taken as his sincere effort to explain to his parents what had happened? Was Jesus trying to help his parents understand his mission? Did they take it that way?

Did they get even more confused?

As confused as Joseph and Mary were, Jesus went home with them, and “was obedient to them.”

Under their guidance, he “advanced in wisdom and age and favor before God and man.”

This can be the same reality in a young person’s trying to discover God’s vocation and plan for him or her.

How does it work in my own experience? 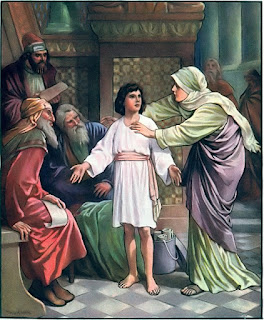 Luke begins his account of the birth of Jesus by placing it in the reign of Caesar Augustus.

Before becoming the Emperor, Augustus (previously known as Octavian) had defeated Mark Antony, bringing an end to 13 or so years of power struggle and civil war.  With his victory, he became the sole ruler of Rome.  Within a short time, the Roman Republic came to an end, and the Roman Empire began with Augustus as the very first Emperor.

The people of Rome then enjoyed a period of peace that lasted over 200 years, known as pax Romana  (Roman peace, also known as pax Augusta).

However, for the peoples and nations defeated and conquered by Rome, it was not the same. Augustus expanded the empire with conquests, political alliances, and suppression.  The way Pilate treated the children of Israel, as recorded elsewhere in the New Testament (and other historical records) is an example.

Luke recalls such a world by mentioning the name of Caesar Augustus, Quirinius, the Roman appointed governor of the Province of Syria, and the enrollment that Rome imposed on its conquered territories.

The pax Romana was a kind of relative and even artificial peace.

To such a world, the true Prince of Peace came.

Yet, this weak infant brought true and lasting peace.  This peace was not just for a selected and privileged few.  His peace was revealed in the humble surrounding of a manger, given first to the poor and lowly people of the land.

It was God’s true and lasting peace “on whom [God’s] favor rests.”

How do I view the way and the power of God’s peace?  How do I promote that peace?  What do I do to build a world with the peace that the Messiah brings?


Readings (Mass During the Night) 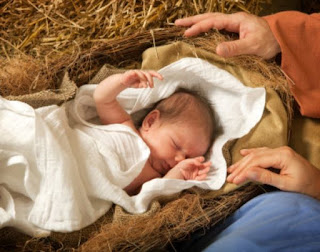 The Joy of One Visited by the Lord

Elizabeth and her son John are the first human beings who recognize the presence of the Lord.  They are the first to receive the privilege of welcoming the long-awaited Messiah.  Her “old age” (Luke 1:36) can probably be seen as a symbol for that longing.

Elizabeth was once known as “barren” (the words of the angel to Mary in Luke 1:36).  The barren woman receives the gift of motherhood.

Humanity now knows the fulfillment of “what was spoken by the Lord.”

She represents the longing human race that is now visited by the Lord. 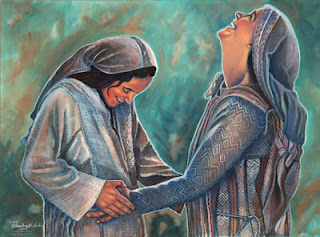 December 22 - Sixth Day of the Great Days of Advent


O King of the Nations

O King of the nations, you alone can fulfil their desires; cornerstone, binding all together: come and save the creature you fashioned from the dust of the earth.

December 21 - Fifth Day of the Great Days of Advent

O Radiant Dawn, splendor of eternal light, sun of justice: come, shine on those who dwell in darkness and the shadow of death.

December 20 - Fourth Day of the Great Days of Advent

O Key of David, O royal Power of Israel, controlling at your will the gate of heaven: come, break down the prison walls of death for those who dwell in darkness and the shadow of death; and lead your captive people to freedom.

December 20 - Fourth Day of the Great Days of Advent

December 19 - Third Day of the Great Days of Advent

O Root of Jesse you stand as a sign to the peoples; before you kings shall keep silence, all nations bow in worship: come and save us, and do not delay.

December 18 - Second Day of the Great Days of Advent

who gave him the holy law on Sinai mountain:

come, stretch out your mighty hand to set us free....

December 17, First Day of the Great Days of Advent

Today, December 17, begins the Great Days of Advent. We are now in the second part of Advent, focusing on preparing for the celebration of Christ's birth. (The first half of Advent focuses more on Christ's second coming).

Among the tradition of these Great Days of Advent is the "O Antiphons" (more familiar in the song "O Come, O Come, Emmanuel") These prayers are used at Mass as the Alleluia verse and at evening prayer.

Each of these antiphons highlights a title of Jesus, the Messiah.May these prayers help us focus on Jesus Christ, the reason for the season.

And today, the prayer is

O Wisdom,
O holy Word of God,
you govern all creation with your strong yet tender care.
Come and show your people the way to salvation....

(The song: posted on whispersintheloggia.blogspot.com)
Posted by Fr. Dominic Danh Tran, SDB at 2:30 PM No comments:

3rd Sunday of Advent - B

"What then Should We Do?"

Remember how last week’s Gospel passage ended? John the Baptist announced that “all flesh shall see the salvation of God.” (3:6)

We skipped a few verses here, but it’s still in the same context when first John calls people to change their lives. In response, they ask him, and we begin today’s passage, “What then should we do?”

John instructs people to live God’s way in their own lives, not in some foreign ways of existence. They are to take care of those who are less fortunate. And they are to do what they are supposed to do as their life circumstances present to them.

Most interestingly, John does not tell the tax collectors and the soldiers to quit. These tax collectors and soldiers were not even working for a legitimate government. In fact, they were assisting the Romans in their occupation of Palestine. Yet, they can still be just.

So, how can I be just in my very circumstances of life so I can live and bring about that reality where “all flesh shall see the salvation of God”?

What is John saying to me?
Posted by Fr. Dominic Danh Tran, SDB at 2:56 PM No comments:

“All Flesh Shall See the Salvation of Our God.”

Luke places John the Baptist and his preaching in the historical context with a list of names.  “In the fifteenth year of the reign of Tiberius Caesar, when Pontius Pilate was governor of Judea, and Herod was tetrarch of Galilee, and his brother Philip tetrarch of the region of Ituraea and Trachonitis, and Lysanias was tetrarch of Abilene, during the high priesthood of Annas and Caiaphas.”

Some of these people we know because they are mentioned elsewhere in the New Testaments or historical records.

The names of the Roman Emperor Tiberius Caesar and Pontius Pilate, the Roman governor of Judea, brings to mind the oppression and bloodshed that come with the Roman conquest and occupation of the land. [1]

Pontius Pilate was “a cruel and malicious” ruler [2], accused of “constant executions without trial, unending grievous cruelty.” [3]  And remember the way he handled the trial of Jesus?

And the mess in the family of Herod and Philip! Herod stole the wife of his brother and was responsible for the death of John the Baptist's death because John told him it was wrong to do so.

Not mentioned here, but there were other people who were waiting for the fulfillment of God's promise.  John, his parents, Mary and Joseph, the shepherds, the Magi, the people who came to the desert to listen to John, …

To such a world, to such reality of the human race, the Lord came.  And “all flesh shall see the salvation of our God.” 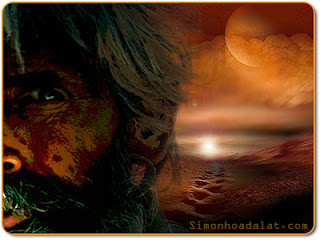 Be Vigilant at All Times

In this new liturgical year – Year C, the Sunday Gospel is often taken from the Gospel According to Luke.

However, we begin the liturgical year not at the beginning, but near the end of the Gospel with a reading from chapter 21, out of 24 chapters, of Luke.

Advent begins with the call for us to be ready for the return of the Messiah at the end of time, not his first coming at Bethlehem.  That will come in the second half of Advent.

Luke wrote to Gentile Christians (not of Jewish origin) probably at the end of the first century.   The earlier part of Chapter 21 records Jesus’ prophecy of what would happen to Jerusalem (21: 20-24).  Luke’s readers knew what had happened to the country of the Jews and of the Jerusalem temple [1] .   They experienced Jesus’ words fulfilled.

Jesus also warned his disciples of the persecution they will endure because of his name (21: 12-19).

Luke's readers had also heard the stories of what happened to Jesus’ disciples, who failed to heed his warnings.  They were not “vigilant at all times” and failed to “pray” at the hour of Jesus.

Jesus’ warnings must have been very real for them: “Beware that your hearts do not become drowsy from carousing and drunkenness and the anxieties of daily life, and that day catch you by surprise like a trap.”

It has been 2,000 years since Jesus spoke these words.

Are we better at paying attention to his warning? 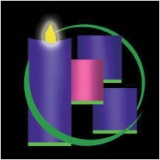