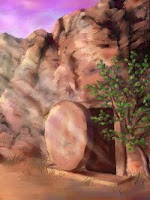 In Mark’s report of Jesus’ Resurrection, he specially mentions three imageries that are rich in meaning.
(1) The darkness of the crucifixion (15:33) has been replaced by the light of a new day, “when the sun [has] risen.” God’s light has overcome the darkness of sins and death, of what appears to be a failure by human standards.
(2) The women who go to the tomb wondering who will remove the large stone for them find the stone already rolled back. The women’s obstacle, whether the result of an oversight or their eagerness to care for Jesus, has removed by God’s action.
God indeed has entered our history, and nothing can stop God from achieving his loving plan. Nothing at all. – the force of nature, human errors and weakness, the evil of sins, and death itself. God has overcome all in the resurrection of His only Son.

The first two imageries then set the tone for the third detail.

(3) When Jesus was arrested in the garden, among his followers there was a young man who ran off for his life. He did so naked (14:52). Now, sitting on the right side of Jesus’ empty tomb, there is “a young man clothed in a white robe.”

The nakedness of the first young man in the garden can be seen as a symbol for the failure of the disciples, who abandoned Jesus out of fear. The appearance of the second young man sitting in the tomb affirms us that “as God has transformed the death of Jesus by raising him from the dead, discipleship may be reestablished” by God’s action[1]. And we know that God has been, and continues to right our wrongs throughout history. And we know and believe that God has been, and continues to do so in my life.