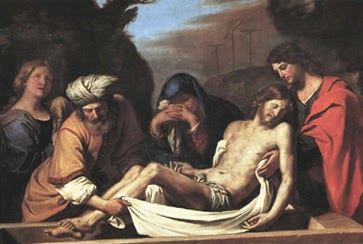 "Joseph of Arimathea, secretly a disciple of Jesus for fear of the Jews, asked Pilate if he could remove the body of Jesus. And Pilate permitted it. So he came and took his body.
Nicodemus, the one who had first come to him at night, also came bringing a mixture of myrrh and aloes weighing about one hundred pounds.
They took the body of Jesus and bound it with burial cloths along with the spices, according to the Jewish burial custom." (John 19: 38-40)

Joseph used to follow Jesus in secret "for fear of the Jews." Now, he even goes to Pilate and ask for the body of Jesus.

Nicodemus "was a Pharisee [and] a ruler of the Jews." (John 3:1).  He "had first come to to Jesus at night" probably because he did not want people to know.  Now he comes bringing "a mixture of of myrrh and aloes weighing about one hundred pounds." It would be pretty difficult trying to hide something that heavy.

Do I want to be known as a follower of Jesus? Why would I keep my relationship with Jesus secret?

May his passion and death out of love for me give me the courage to profess and live my faith in him.